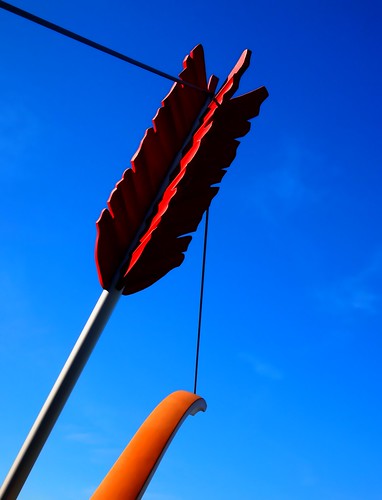 I’m on Fourth Street when the radio cackles. Active shooter at the middle school. My heart boings. The wife and I made Jimmy go to the Valentine’s dance.

I throw on my siren and flip a bitch. Cop’s prerogative. A perimeter’s being established when I screech into the parking lot.

“Whack job with a crossbow.” He motions the SWAT team into place. “Jimmy in there?”

A succession of clicks, guns being cocked.

The hostage negotiator uses a bullhorn. “Lay down your weapon and come out with your hands up.”

The gym door creaks open. Out comes a guy sporting a diaper. His chubby cheeks rival Jimmy’s baby pics. His curls are angelic.

“You’ve got this all wrong,” he says.

The SWAT team hauls him off while the rest of us clear the building. All we find is a toy bow and arrow.

The kids slink out in a disorderly line, sulking instead of relieved.

He nods at Violet clinging to his arm. “I think she needs a doctor.”

“I’m fine,” she says, starry-eyed, and strokes his face.

Georgene Smith Goodin’s work has appeared in numerous publications, and has won the “Mash Stories” flash fiction competition. She lives in Los Angeles with her husband, the cartoonist Robert Goodin. When not writing, she is restoring a 1909 Craftsman bungalow with obsessive attention to historic detail. Visit her blog, or follow her on Twitter, @gsmithgoodin.