There’s a clearing in the forest, a clearing where you’ll find six stumps.

Study the gnarls of bark and discover the lines and woes of life. See what once were men. 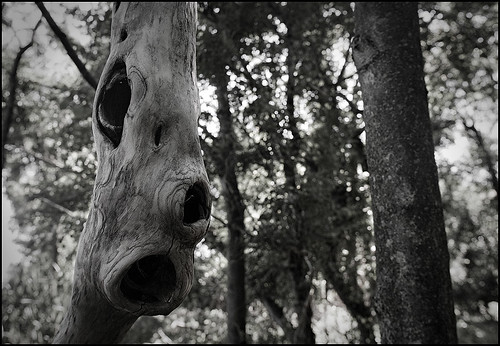 The world got to be too much. So they left. Went here. Went wodwo. Spent their wildness and came to rest. They wanted to be one with the woods. Now they are.

Listen, and you will hear his whisper.

He will tell you his name, for he alone among the circle still remembers his name.

He will tell you his grief, for he alone among the circle still knows what it is to hurt.

He will ask you a boon. Your heart will got out to the fading whisper and you will ask how you might help.

He will beg for death.

And you will have no way of giving this to him, save a fire that would only serve to destroy that holy place. And you will not commit such sacrilege, not for just one soul.

So you will back slowly away from the clearing.

His screams will be faint. You will hear them all the same.

Brendan Foley lives in Massachusetts, where he has made a habit out of not knowing what he’s doing. He’d like to make a career out of it. You can follow his ramblings on Twitter: @TheTrueBrendanF, or email him at brendanmfoley@outlook.com. Three years from now, it will be revealed that he was dead the entire time.