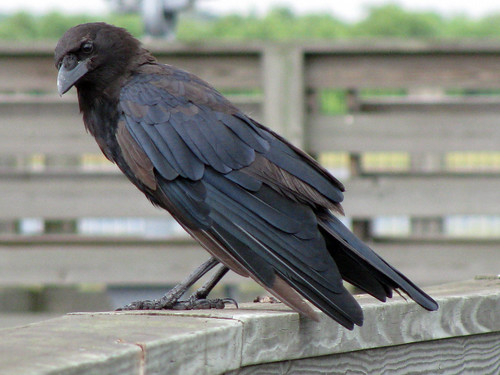 We were strolling around the cloisters when we first noticed the crow.

It was just perched on the stone wall with its head cocked. It seemed to be watching us.

A black garbed reminder of the legions of dead monks who’d prayed here.

“Shoo.” Mum flapped her hands at it.

Billy chucked a stone. Mum told him off. “Show some respect.”

Wherever we walked in the cathedral grounds the crow came with us. An avian shadow.

It made me feel goose bumpy and a bit sick. Billy of course made a game of it, talking about crow pie for tea.

We wandered inside to gaze at knights’ tombs and jewel like stained glass windows. Which was when I remembered Grandma telling me years ago, “The crows know.”

She’d been dead a little while by then. I had never really understood Gran’s sayings.

The memory grew and ripened though. That night while our little household slept I went to her wooden chest and unearthed her cloak of feathers. It was an heirloom; the birds’ plumages interwoven. Fabulously glossy light catchers.

The crow was waiting for me outside. I perched on the six foot garden wall, wrapped the feathery mantle around me and took flight towards the cathedral spire.

Alyson originally trained as a teacher/tutor who wrote children’s books/poetry as a hobby. Fast forward to 2016, she now lives near Bronte terrain in Yorkshire. She writes mainly noir Flash Fiction (some of it has been published on line) and spooky tales, and is also writing a Y.A. novel. She lives with her partner, teen son, and 3 rescue cats. Alyson is a confirmed chocoholic and still hopeless at maths.

Her work has appeared on Tubeflash; The Casket of Fictional Delights; Bunbury Press; 101words.org; United Jotters; Paragraph Planet; and won 2nd prize in an ‘On The Premises’ mini flash contest. Flash fiction story appearing in Raging Aardvark’s Twisted Tales anthology in November; winner of Daggerville games monthly FF comp and shortlisted in other comps. Alyson is publishing her children’s book ‘The Runaway Umbrella’ on Kindle in the autumn.