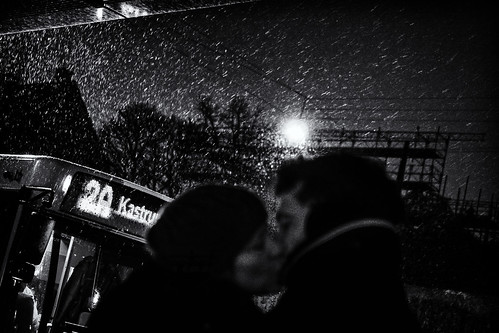 I want to remember it happening now. You start to get into your car and stop, looking back up at me. It’s a purely filmic moment, a scripted event; framed and lit by the concentric glows of streetlights reflecting a sheen over everything, everything iced over. I want to remember it happening now because it has to happen. Now. Before everything changes. Before this moment passes into the next and we’re nothing but opposing glares of headlight over ice-glazed streets, two beacons leading away from each other. Before this moment is over. Now. Like this.

C.C. Russell lives in Casper, Wyoming with his wife and daughter. His writing has recently appeared in such places as Tahoma Literary Review, Word Riot, Rattle, and The Colorado Review. His short fiction has been nominated for a Pushcart Prize, Best Small Fictions, and Best of the Net. He has held jobs in a wide range of vocations—everything from graveyard shift convenience store clerk to retail management with stops along the way as dive bar dj and swimming pool maintenance. He has also lived in New York and Ohio. He can be found on Twitter @c_c_russell.