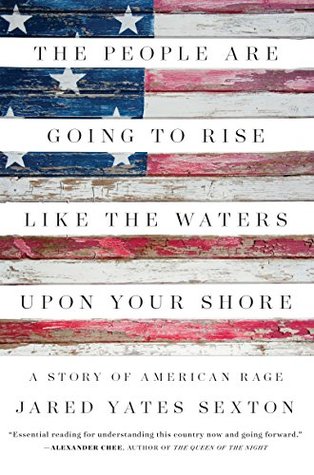 The People Are Going to Rise Like the Water Upon Your Shore by Jared Yates Sexton
My rating: 5 of 5 stars

I first started following Jared Sexton a few years ago after we both had short stories appear in the same lit mag. But, I think, looking back, it was really only a matter of time before I became interested in his work in any case. During the wild election season of 2016, Mr Sexton bubbled to the top of my social media feeds as he started live-tweeting un-sympathetic dispatches from Donald Trump rallies. These boots-on-the-ground journalistic forays painted a fascinating (if disturbing) portrait of what was really happening in Trumpland.

I followed along, riveted, as the tone of these rallies grew uglier under Sexton’s watchful eyes; I watched as his political pieces started getting picked up by increasingly prestigious outlets like The New Republic and The New York Times; I sat mesmerized as he struggled with a growing backlash from the emboldened right-wing online fringe (and it’s newly initiated non-fringe as well). I felt like we observed the whole train wreck together. Every unbelievable, exasperating, exhausting moment of it.

So, of course, when I saw that he was going to be putting out a book based on his earlier reporting and research, I was damn near first in line.

The main thing to make clear about The People Are Going to Rise is that Mr Sexton has a point of view. This is a less spectacle-based form of gonzo journalism than that popularized by the likes of Hunter S. Thompson, but no less compelling. Sexton is as much a character in the book as Hillary Clinton or Donald Trump. He tries different things, he gets deep into discussions with people he doesn’t understand, and he injects himself into the narrative. He’s not shy about pointing out where he stands, and that means some people who fundamentally disagree with Sexton’s take that Trump is a boil on the ass of American politics (and America itself) will probably not be able to see past their “fake news” (oh, the irony) take on the book.

And that’s to their detriment. Because this book is as critical of Bernie Sanders and Bernie Bros as it is of Trump and his bewildering supporters. It pulls no punches in analyzing Hillary Clinton. And, fundamentally, this is a book where the central theme is not “Trump is bad,” but that Trump is just one symptom of a plague of rage and disenfranchisement. One stand-out moment in the book is where Sexton takes a staunch conservative stranger with him on a road trip to a Hillary Clinton rally. The person-to-person exchange characterizes the tone of what the book seems to be saying: what we have now isn’t normal, but there is a normal that doesn’t involve hatred and destruction and violence and death. To get there, Sexton seems to say, we need to close our mouths and open our ears.

This is a remarkable book. Its immediacy is breathtaking (I had no idea how much I was still stinging from the devastation of election night—less than a year ago!—until I read Sexton’s eerily reminiscent account of it), but the scope feels like it bears the weight of history. Perhaps this comes from the care put into contextualizing events, at least those which are not still outstanding (like Trump’s increasingly obvious ties to Russia, which is still breaking news regularly). Sexton’s voice is clear and engaging, the writing strong and passionate without being dogmatic. I tore through this and even though every event it recounts is still fresh in my memory I never felt it was disposable; on the contrary, it felt fresh and significant. Highly, highly recommended.