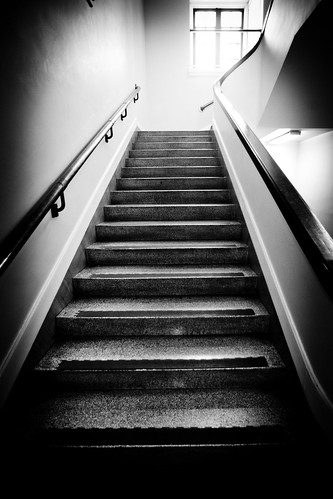 Eric gasped awake. He had been sleeping. Was it sleep? He remembered his arm sliding down the edge of his hospital bed sheets, the IV tugging at his wrist.

He was at the edge of a small blue room. In front of him, a staircase disappeared upwards, and a wooden table stood to his left. Eric gathered himself, got to his feet and saw that there was a sheet of paper on the tabletop, with words inscribed upon it in cursive and a ballpoint pen to one side. He looked closer.

Did you do all you wanted?

Was there anything you would change?

Was it alright to have been you?

Please write any recommendations you can think of in the box below so that we can improve the experience for others in the future.

We appreciate your feedback.

Eric considered a moment. Then he crossed out the first and the last questions and wrote beneath the second:

And an easier way to shave without getting spots on your chin.

Then he took the stairs.

Dominic Daley is a final year student from the U.K. His work has appeared in Songs of Eretz Poetry, Urban Fantasist – Grievous Angel, MicroHorror, Hellnotes, and 365tomorrows. He has a twitter (@APierAppears) and a WordPress.