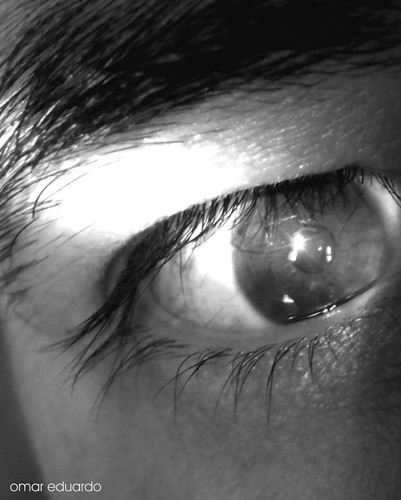 I still rub my eye a lot.

I used to rub both of my eyes. I think that’s why the left one started to twitch.

I’d always been worried something would get inside—I’d seen too many videos of botfly larvae removals, right from the crevice between the globe and the socket. I had a craving for that kind of macabre.

I don’t know what I touched—what my finger captured, maybe under one of its deep grooves.

Go to the doctor.

Because it wasn’t horrible at first. It’d happen after laughing at a joke. After sneezing. Innocent.

It took only a month. The twitch became unbearable. My left eye swelled up, ripe with hurt, always semi-closed. I couldn’t move without it stirring.

Go to the doctor.

The night before my appointment, I slept. It was rare, but there were moments of rest in between the irritation. I was happy in bed.

I woke calmly to buzzing pain in my face. Then I screamed.

I could only see with my right eye, since the left was out of its socket, optic nerve pulled taut, the whole thing slowly crawling away on six legs.

Alex P. Grover is currently a digital production associate at Penguin Random House. His work has been published at Strange Horizons and A cappella Zoo, among other venues for the weird, as well as on the Quirk Books blog. Fortunately, his rational side left him long ago. You can visit www.alexpgrover.com or follow him on Twitter @AlexPGrover to find out why.