I contributed my speculative take on a couple of Radiohead and Nick Cave songs to Pidgeonholes’ 90s music theme issue last year. So when they announced there was going to be a millennial edition, I figured I’d sit it out. Not because it didn’t intrigue me, quite the opposite. But the 90s was my formative decade: high school, college, marriage; the music from there is more firmly etched into my psyche and identity than that of the following or preceding decades. I figured I didn’t have as much invested in the 2000s music. I guess I was wrong.

A few ideas did occur to me in the first months of the open submissions call. I shoved them all aside in favor of other work. Remember, I wasn’t going to create something specific for this issue. I’d already skirted disaster with Paranoid Android—writing a very specific themed story that probably had no chance at publication in another context. No sense courting disaster again.

Then Pidgeonholes editor Nolan Liebert put out a notice toward the end of the submission window:

Specifically looking for work inspired by The New Pornographers? My teeth clenched, sweat trembled on my expansive brow. If Radiohead is, as I mentioned in the essay for Paranoid Android, one of my very favorite groups, TNP almost certainly is my favoritest of favorites. They’re a supergroup, of sorts, if indie artists can achieve those kinds of grandiose labels. But individually they are great: A.C. Newman’s solo albums are dynamite; Kathryn Calder’s first solo album is a criminally under-appreciated masterpiece; Neko Case is probably the most consistently amazing songwriter of the past two decades. Sometimes collaborations work better on paper than in practice, but with TNP, that’s not the case. Their music is technically skillful, brilliantly arranged, wonderfully quirky but also super catchy and strikes that great balance between fun and meaning. It is as nuanced and complex as life itself.

Maybe that’s why it was so irresistible to write from it, and create a story from the stories their songs often hint at but typically leave wide open.

There are four albums to choose from in the decade in question. Mass Romantic from 2000 is good but feels sort of like an extended jam session between talented forces who don’t quite have their collaboration honed. The last album of the decade, 2007’s Challengers, is a quiet tour de force, the album it took me longest to appreciate but the one I find new appreciation for each time I listen. 2005’s Twin Cinema was maybe an obvious choice—I’d have a hard time arguing a case that it’s their best all around album. But in the end I set my sights on 2003’s Electric Version. It was the album that introduced me to the band. It’s the one I’ve listened to the most. And, most notably, it includes the song “From Blown Speakers.”

There are other TNP songs I maybe like more. Others I’ve listened to more frequently. None are more quintessentially New Pornographers songs to me than this one. 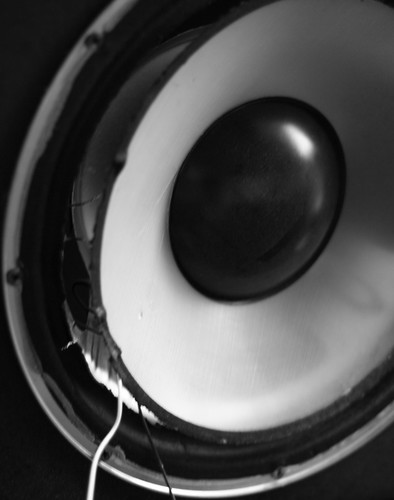 Lyrically it’s… vague. The words sometimes seem more designed to fit an aesthetic for the song than to mean anything specific. The poetry of them is highbrow and low; corny and beautiful; silly and profound. And yet there is a sense I’ve always gotten from the song. A notion—perhaps nothing more. But it lent to a narrative of sorts, the kind of disjointed and raw nod-to-plot found in inscrutable music videos. The challenge, as I saw it, was to pull those threads that work in music or visual media into something cohesive that would work not just in a gestural poem or an abstract bit of prose noodling, but in a genuine story.

I had to borrow from other parts of the album to fit it all together, but in the end I thought I had something that might work. A couple of critique partners, Josh Jones and P.J. Wren, helped tighten things down with the perspectives of people unfamiliar with TNP. Then Sarah Vickery—who made a point to mention she was quite familiar with Electric Version—took a pass at it and really helped tighten the screws on the theme and the use of the inspiration (as opposed to the casual reference I had leaned on too heavily in earlier versions). It was her guidance that resulted in a piece I was confident enough to send in for consideration.

It’s worth noting that I have not, to date, had any of my work appear in a publication that wasn’t also packed with great work by other great authors. But sometimes the cohesion of a thing is worth mentioning. I like “Moments That Bomb” and I’m proud of it, but it’s wildly outshone by the other work in this Aught/Naught issue. From Azia DuPont’s poem inspired by The Strokes to Ron Gibson’s Tegan And Sara piece to great stuff by 200 CCs contributor Georgene Smith Goodin, plus Christina Dalcher, Christopher Iacono, Jennifer Todhunter, the list goes on and on. It’s just a really great publication all around. It makes me more happy to be included in their company than to be published in the first place, and that’s really the best endorsement I can give it.