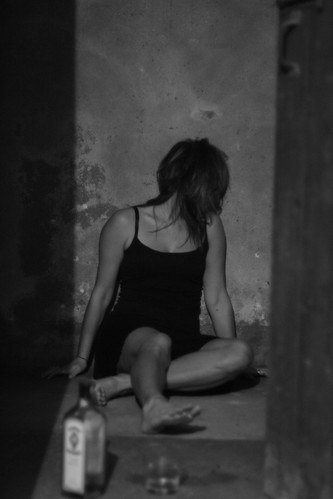 In the evenings, the gin would have taken effect, and the barbed words drawling from your tongue sounded smooth from over-use. I was cursed for never being the shock of red you’d wanted to see. I was a monster, something you’d always longed to sluice away.

Your eyes would be glass when I tucked you under your blanket, your bruised legs purple, so cold. A thin trickle of saliva would dribble down your chin, marking your blouse. I would wipe your mouth with a tissue, throw it in the bin.

But the heavy scent of juniper lingered. Sometimes I would lift the near empty bottle, tipping the dregs into my mouth. I’d wait a few seconds for the familiar bitterness to coalesce. How it burnt, leaving nothing but the afterglow of a perfumed sigh.

One night, as the other kids played in the dusk outside, I sat in the half-light, felt myself change. It was a moment, a sordid understanding that I was just grit between your teeth. You would rather spit me out than make me into a pearl.

As the moon rose over the house, I felt myself drift, go with it. One by one, the stars pricked the underbelly of night, while I sat, listening to you breathe.

Anne Lawrence Bradshaw writes poems and short stories. She lives in a dilapidated cottage near Hadrian’s Wall, drinks too much tea and walks a lot. Tweet her @shrewdbanana.

One thought on “Mother’s Ruin”