Vitality slipped from his dark, calloused fingertips. Blueish, purpleish, and then grey. Stigmata once throbbing raw with rot blackened to an impenetrable void. His palms were a purgatory of coagulate crust. The eyes of the all-seer shrivelled upon the salvationless silhouette of the boulder which obstructed his portal to the next life.

He was dead. Or dying. Or definitely, definitely dead. 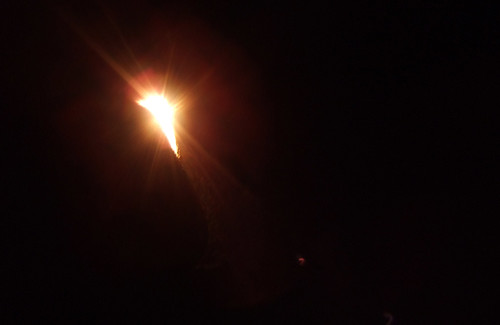 He stared at the boulder for hours on end, blinking less and less until he no longer felt the need to scrape his sleep-starved lids against eyes so dry and devoid of sight. Rocks and rubble etched secrets and scripture into his back, and eventually he was comfortable enough to settle into his Grotto of Eden as he awaited his exile into a new existence. His nerve endings had ruptured—their own rapture, perhaps—so he no longer felt the searing necrosis of his physical form, nor did he choke on the stench of his own decay. He welcomed rigor mortis eagerly, allowing it to exorcise him of a life left.

A couple of days later, a crack of light seeped through the edge of the boulder. It caught his vacant eyes and singed his peeling flesh. But he remained staunch. He had found his way through days ago.

Alex Creece is made of dirt and determination. It’s the latter which laces her lungs with grit.

I saw her hair first, the same color as the wind-blown clouds. She was wearing only a thin shift, and her skin glittered with a thousand liquid stars, as if she had just bathed in the lake behind her.

She smiled over her shoulder at me, but before I could accept her invitation, I noticed something that sent a sudden chill up my back. Her fingers dipped below the surface of the water, but they caused no ripples in the lake.

I’d never seen a kelpie before, but the villagers had piqued my curiosity with a warning about unexplained drownings—I’d not believed them until now.

Glancing one last time at the most beautiful woman I had ever seen, I forced myself to turn away, my heart singing in agony. Her banshee shriek followed me all the way home and echoed through the many seasons that followed.

Decades later, I still dream of her at night, even though I have never returned to the lake. I dream of her with regret, although it is not my only one.

Twice, she broke my heart.

I was born knowing the ways of the world, with a heart that could resist her malicious magic—an old man’s heart.

I had a son, once. But… his heart was young.

Alison McBain lives in Connecticut with her husband and three daughters. She has over thirty publications, including stories and poems in Flash Fiction Online, Abyss & Apex, and the anthology Frozen Fairy Tales. You can read her blog at alisonmcbain.com or chat with her on Twitter @AlisonMcBain. 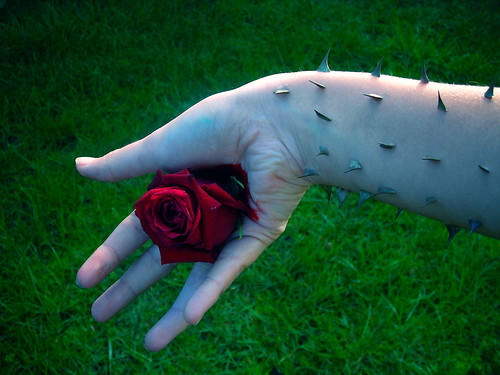 Mason pricked his finger on a rose and fell onto his back, panting. He was certain he’d enter into a coma like Sleeping Beauty. When sleep didn’t come, he studied his finger. Instead of a red blood pearl at its tip, there was a blue substance.

Without thinking, he licked it. Blackness fell.

It was Chloro who went in to dinner, sat with Mason’s parents, and chatted.

Mason’s parents had never seen their son so talkative and imaginative.

“What were you up to before dinner?” his mother asked. “I saw you playing in the garden.”

“I wasn’t up to anything. As soon as I arrived, I came inside to learn about humans. I’ve only seen your species from a distance.”

Mason’s father laughed. “Still in the middle of a game, huh? Sounds like you’re set for an Earth invasion.”

Chloro nodded and went on talking.

The parents laughed as he described dinosaurs and other extinct animals he’d seen since his birth. Detailed how he lived on soil, sun, and water. How he’d waited for a chance meeting with an organism with legs. The parents laughed on, not suspecting a thing.

Sierra July is a University of Florida graduate, writer, and poet. Her fiction has appeared in Robot and Raygun, T. Gene Davis’s Speculative Blog, and SpeckLit, among other places, and is forthcoming in Belladonna Publishing’s Strange Little Girls anthology. She blogs at talestotellinpassing.blogspot.com.

Only astronauts from New State China will travel through the Ghost Rift. In the Ghost Rift sleeting particles of dust make the unseen visible. The Chinese have always known that spirits fill the air.

The crew of the Silver Nightingale laugh at the tortuous routes Westerners take to avoid the Rift. They’re surprised, but they’re relieved when quiet Sung Li, the newest recruit, volunteers to pilot the ship.

She watches the crew as they climb silently into the stasis pods. When they wake, they’ll imagine the feel of ghosts lingering on their skins. They will make loud, nervous jokes.

Sung Li dresses in the captain’s uniform. She has travelled far from the factory slums of Neo Shanghai. She has risen like a leaping salmon from the swarms of her contemporaries. Sung Li has travelled a thousand light years from her childhood, and from her mother’s incessant encouragement.

Sung Li watches the approaching Rift through the metal-glass window. She smoothes down the captain’s uniform, and she smiles. Sung Li has travelled far. She is looking forward to meeting the familiar look of her mother’s disapproval.

A version of this story originally appeared in the Dark Stars anthology.

Deborah Walker grew up in the most English town in the country, but she soon high-tailed it down to London, where she now lives with her partner, Chris, and her two young children. Find Deborah in the British Museum trawling the past for future inspiration. Her stories have appeared in Fantastic Stories of the Imagination, Nature’s Futures, Lady Churchill’s Rosebud Wristlet and The Year’s Best SF 18 and have been translated into over a dozen languages.